If you’ve ever watched any televised mixed martial arts (MMA), you will have seen something similar to the picture below, showing the ‘tale of the tape’ of two athletes about to engage each other with strikes and grappling movements to claim a win on their professional record and get paid. 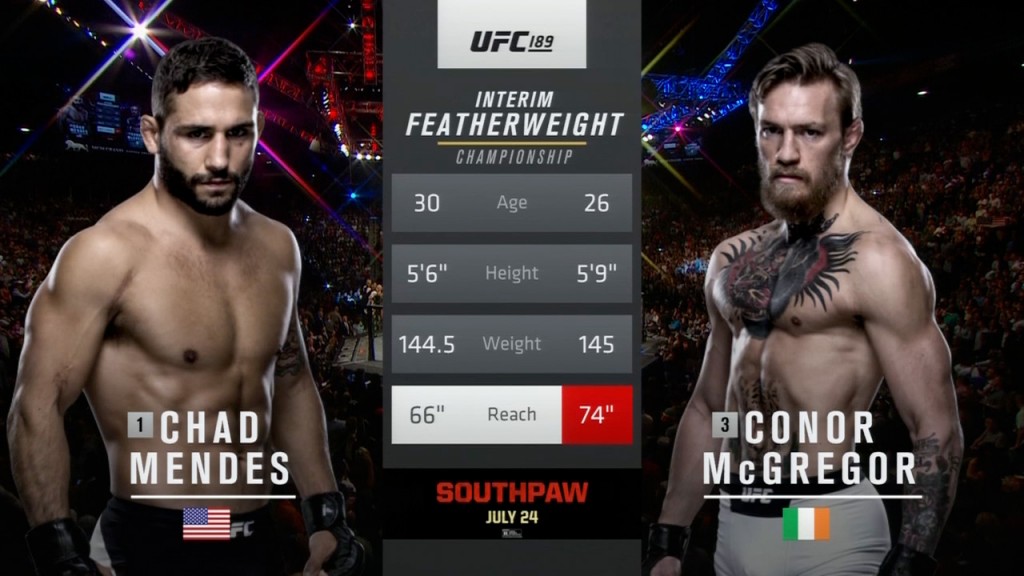 You may also have noticed that sometimes, one or more of the measurements are highlighted, showing that one of the competitors has a larger measurement than their opponent, and in this case, Conor McGregor has a greater reach and height than Chad Mendes. Now why is this information provided and why is it highlighted? Well, the tale of the tape – much like many of the aspects of MMA presentation – is taken straight from boxing, and in the ‘sweet science’ being taller or having longer arms allows you more chance of hitting your opponent without being hit in return. So height and reach matters a lot in boxing!

But does it matter in MMA? I mean, suposedly, the taller person should still have more chance of hitting the shorter person with their fists, but what about kicks? What if the smaller person engages the taller one in a grapple or takedown, rendering their long limbs useless? What then? Does it still matter who needs the longer sleeves on their dress shirt? This is the question that my research has attempted to address over the last couple of years.

In order to do this, it was necessary to determine what could possibly be affected by a competitor having a greater height or reach. I decided that four key areas could be influenced by this:

Now each of these areas are distinct, but play into each other in terms of what we would call ‘success’ in MMA.

Looking for an answer